Everything You Need to Know about Multitasking in iPadOS 13

With this year’s operating system updates, Apple has formally acknowledged that the iPhone and iPad have different uses and different needs. To that end, Apple has given the iPad version of iOS 13 its own name—iPadOS 13.

The big changes include a desktop-class version of Safari that works better with complex Web apps, a redesigned Home screen that sports more icons and Today View widgets, a new floating keyboard you can use for thumb-typing or with one hand, Apple Pencil improvements, and the Sidecar feature that lets you use an iPad as a Mac’s second screen or graphics tablet.

Also important are the tweaks Apple made to iPadOS’s multitasking capabilities. Particularly when you pair an iPad with a Smart Keyboard, you can now get real work done on an iPad more fluidly than ever before. The “hard” part is learning how you switch between apps, display a second app in a Slide Over panel that floats on top of another app, or make two apps share the screen in Split View. Here’s what you can do.

Moving between apps is a key aspect of using the iPad. Apple has provided multiple ways to switch so you can pick those that best fit your style:

Display an App in Slide Over

Say you’re working on your iPad, perhaps in Safari, and you want to keep an eye on your favourite weather app (we like Dark Sky) because an upcoming storm might affect your upcoming bike ride. You don’t need to see both apps all the time, but you also don’t want to have to switch back and forth. With Slide Over, you can put Dark Sky in a panel that floats over Safari and then hide and show it.

The easiest way to put an app in a Slide Over panel is to use the Dock, so this technique works best if the app’s icon is already on the Dock. For instance, while you’re in Safari, swipe up from the bottom of the screen to display the Dock. Then touch and hold the Dark Sky app’s icon until it dims slightly. Keeping your finger down, drag the icon over Safari until it becomes a vertical lozenge. 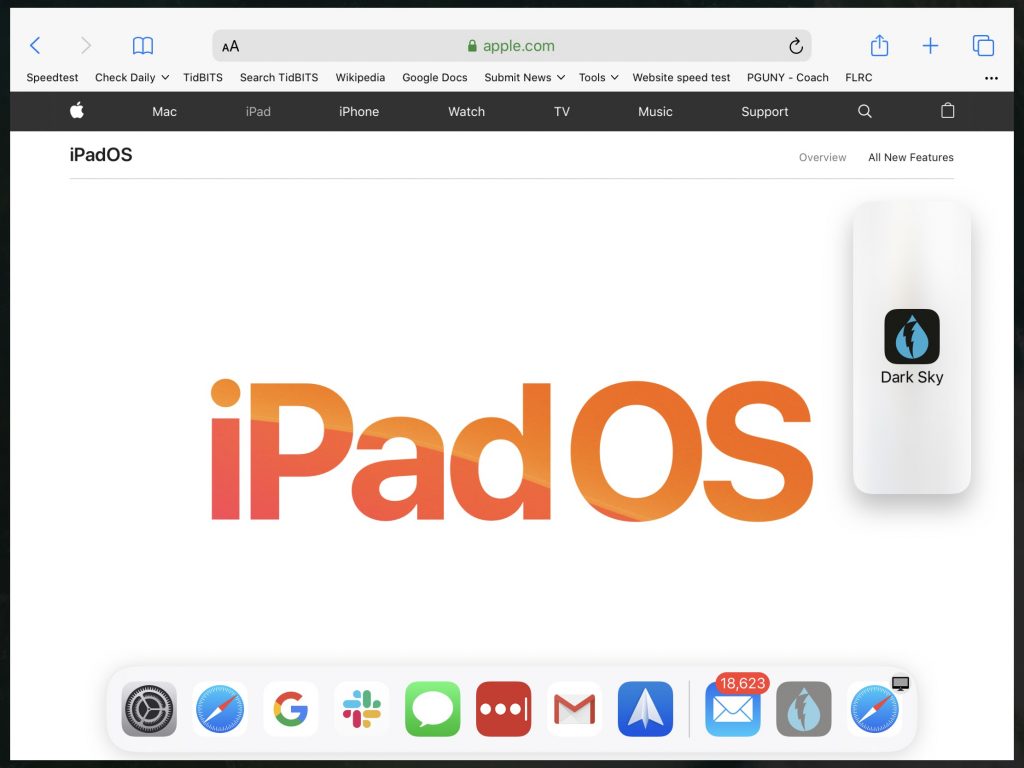 Lift your finger, and Dark Sky appears in Slide Over. (If you get a horizontal rectangle instead of a vertical lozenge, the app won’t work in Slide Over because it needs a larger window.) 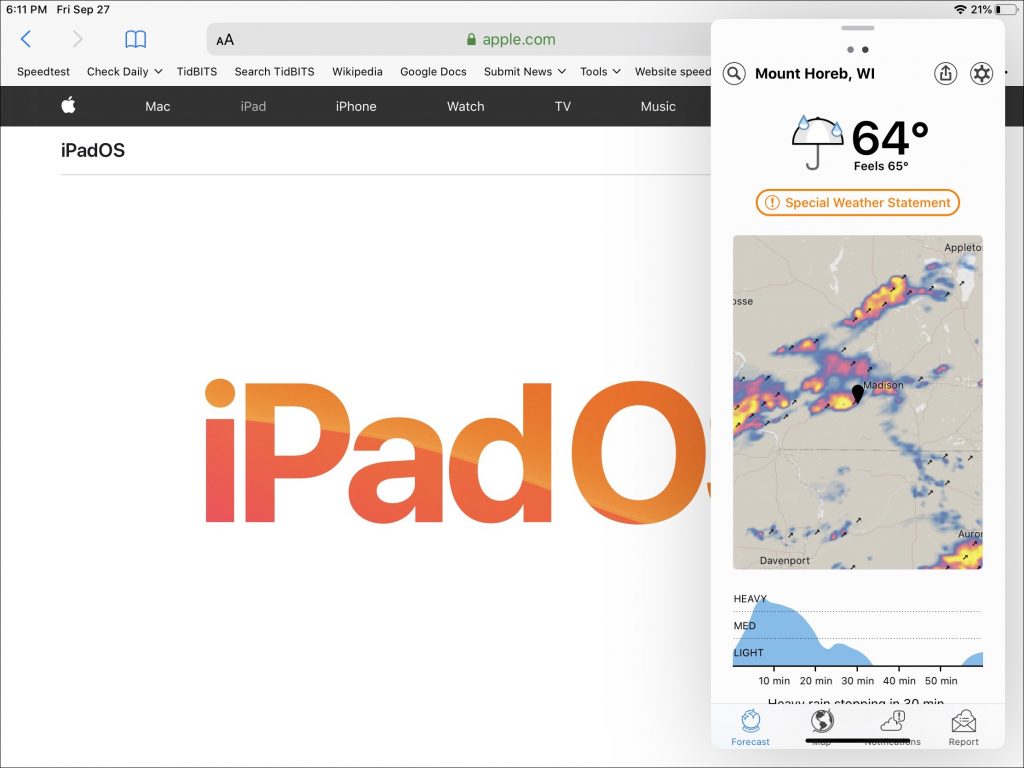 If the app you want to put in Slide Over isn’t on your Dock, you can use a two-handed procedure to get it from another location and drop it onto another app. Working on the Home screen or the Siri search screen, start dragging an app icon (it’s OK if the icons start wiggling). Then use your other hand to switch to the other app (perhaps by swiping right with four fingers or pressing Command-Tab on a physical keyboard) and drop it over the other app. Don’t worry if you have trouble at first—it takes time to become accustomed to two-handed usage.

If you think Slide Over looks a bit like an iPhone app on your iPad screen, iPadOS 13’s big enhancement will make sense. You can now open multiple apps in Slide Over—just drag a new app over the main app as you would normally. Once you have two or more apps in Slide Over, you can cycle through them by swiping right or left on the thick black bar at the bottom, just like on a Face ID-equipped iPhone. To see what you’ve got in Slide Over, swipe up slightly on that thick black bar to display a Slide Over app switcher; tap any thumbnail to switch to it. 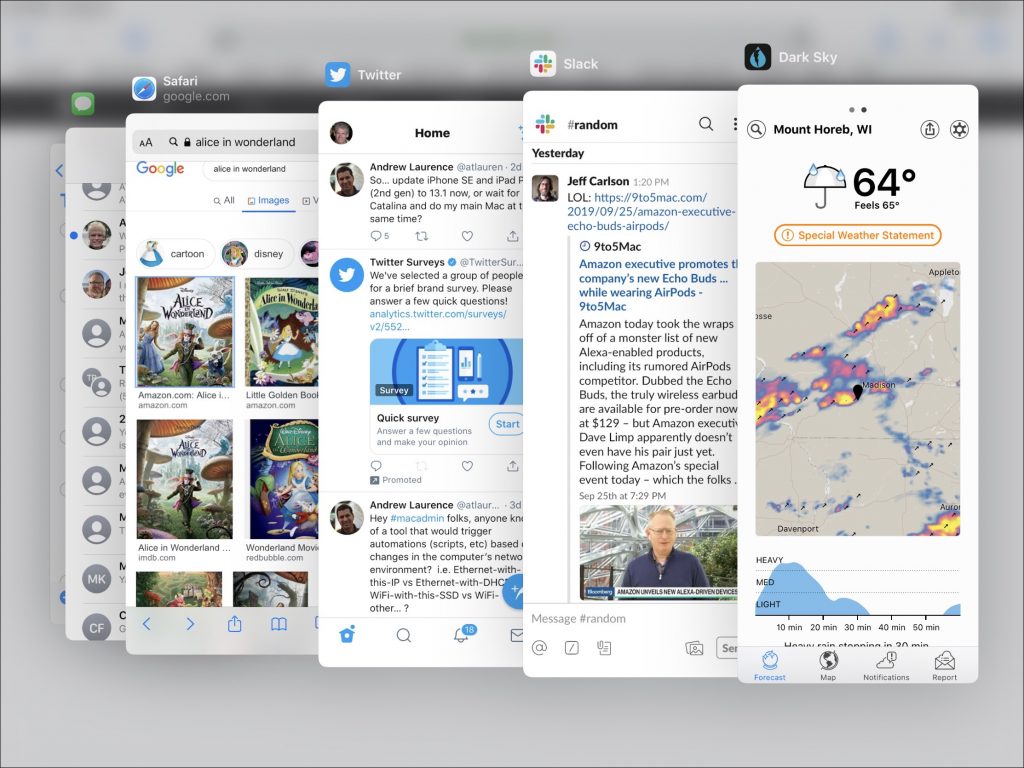 Imagine that you want to email someone a photo you took, so you want Mail and Photos showing at the same time. Displaying two apps side-by-side in Split View is nearly the same action as Slide Over. The difference is that, instead of dropping the app lozenge on top of the current app, you drag it to the far left or right of the screen, and drop it once the screen shows a 90/10 split—after you drop, the split changes to 50/50. 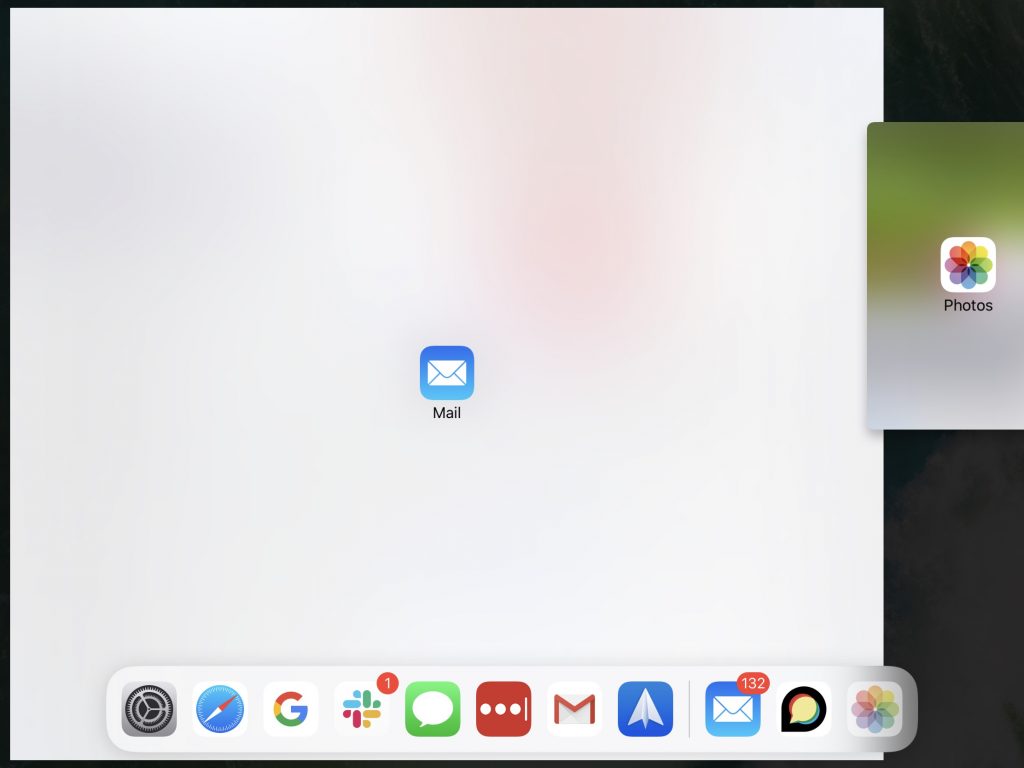 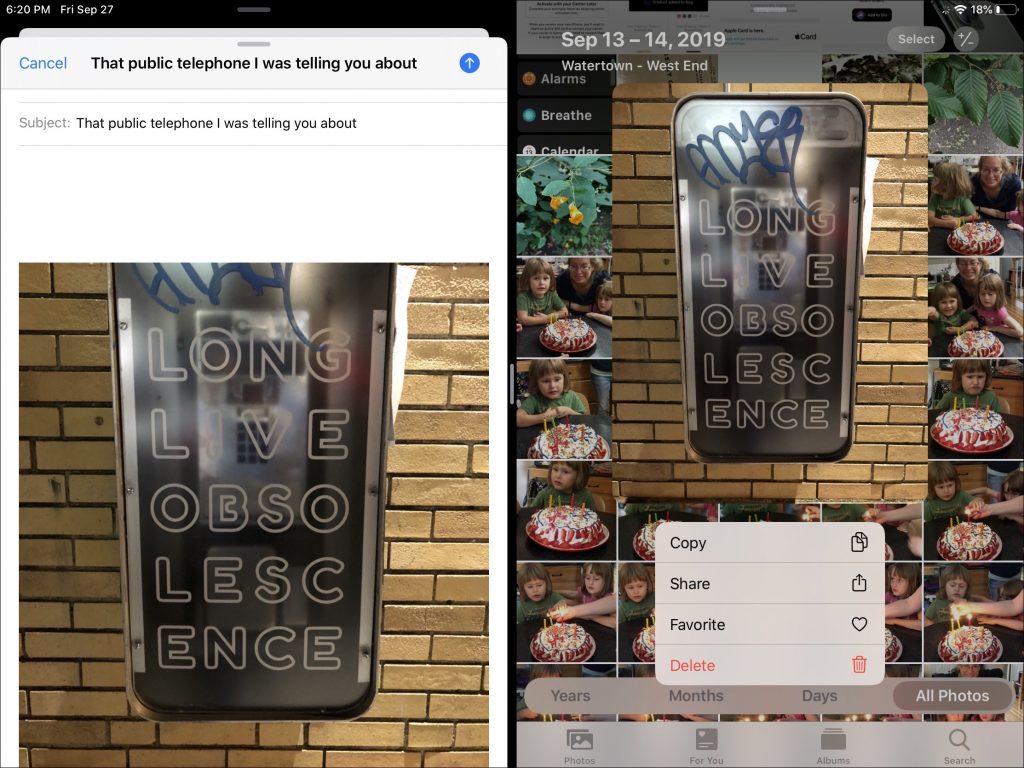 Drag the handle between the apps to switch to a 70/30 or 30/70 split; if you drag the handle all the way to one side of the screen, the app that’s shrinking in size disappears entirely. Both apps in Split View have a handle at the top as well, and dragging one of those down slightly converts that app into a Slide Over panel.

Bonus tip: If you’ve become comfortable with Split View, note that you can also grab an app by that handle and drop it to the left or right of another app—switch apps with your other hand—to move it to another Split View space. (You can also drag a Slide Over app’s handle down slightly to switch it to Split View.)

New in iPadOS is the capability to open multiple windows from the same app. Not all apps support this (or Split View at all), but Safari and Notes are good examples of apps that do. To do this, while in the app, bring up the Dock, tap the app’s icon, and then tap the + button in the upper-right corner of the screen.

There are more direct ways of opening multiple windows from the same app too. In Safari, tap and hold the Tabs icon (two stacked squares) and then tap Open New Window to get a second Safari window. You can also drag a tab from Safari’s Tab bar to the side of the screen to open it in Split View. 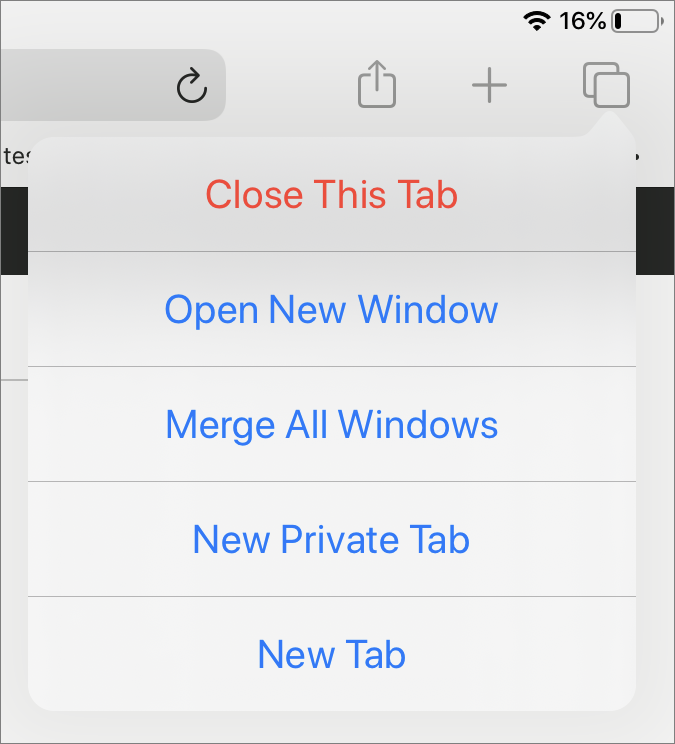 Similarly, you can drag notes from the sidebar in Notes to open them in Split View, either as a second Notes window within the same space, or as an addition to a new Split View space.

With all these possibilities, it’s easy to get confused about what’s open where. The iPadOS app switcher now displays thumbnails of the Split View spaces so you can switch among them easily. 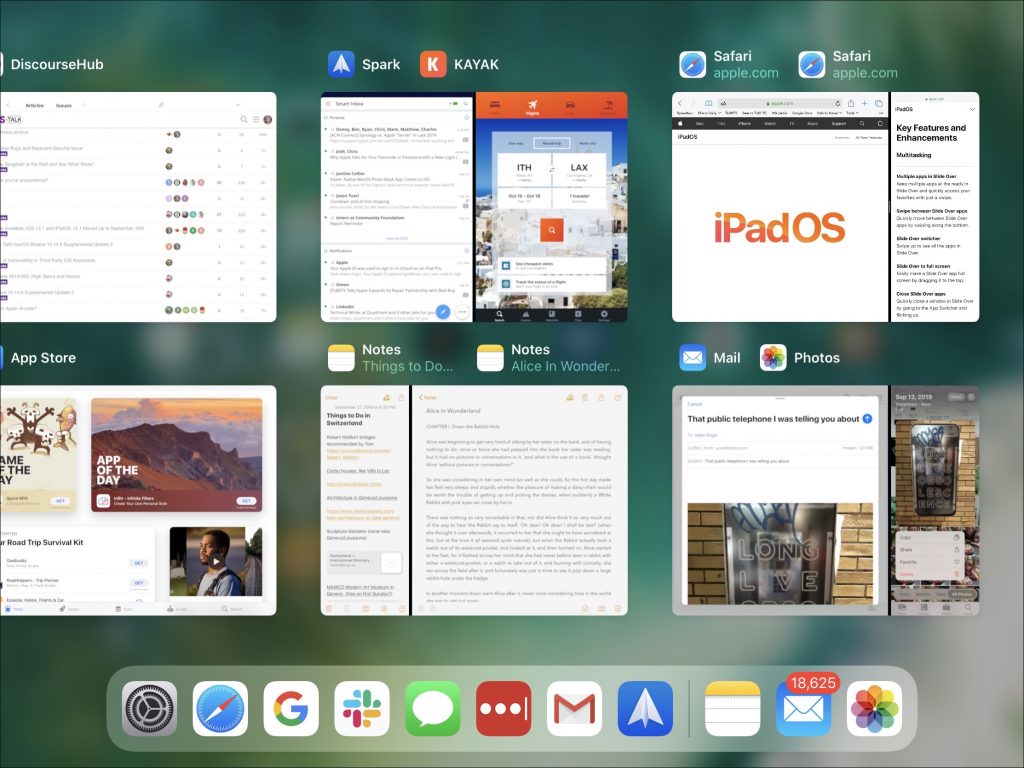 And if you aren’t sure which space has a particular Safari window, for instance, tap and hold the Safari icon in the Dock (or anywhere else) and choose Show All Windows to see all the spaces—including Slide Over—that include Safari windows (Apple calls this App Exposé). 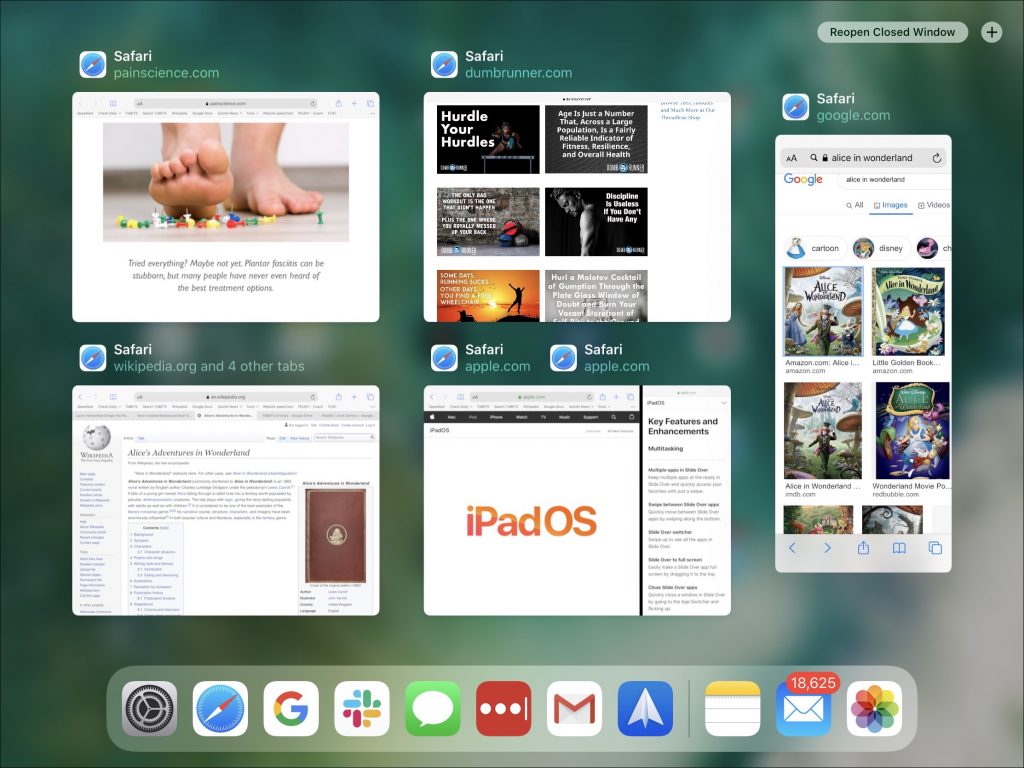 Tag: ipad, tech tips
Apple TV+ Launches on November 1st: What you need to know What Does Having a T2 Chip in Your Mac Mean to You?